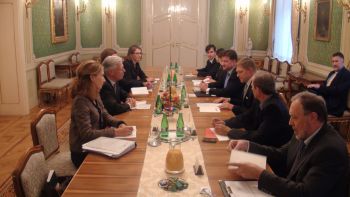 Prime Minister Robert Fico has returned to the sensitive issue of dual citizenship, foremost in respect of Hungary, with which he hopes to seal a bilateral agreement on the issue.

Speaking after a discussion with OSCE High Commissioner for National Minorities Knut Vollebæk, Fico affirmed that the Slovak Republic would continue putting forward its proposals for an agreement with Hungary, despite its earlier draft being rejected by its neighbours to the south last year.

Fico still sees a bilateral agreement as the best way out of the dispute, which came about after Hungary extended entitlement to citizenship to any ‘Hungarians’ abroad. The Slovak Republic reacted by introducing a bill that automatically stripped applicants of their Slovak citizenship.

The Slovak PM therefore feels that both laws should be cancelled and replaced by the agreement. Fico called it a strange interpretation of international law if someone can get citizenship in Hungary without ever having even been in the country.