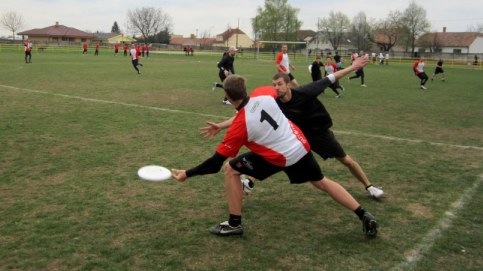 For those of you who don’t know the game of Frisbee, I’ll give you a little introduction. Commonly know as the game where you throw a plate-like plastic disc for your dog in the park. Yes, that is the one, but it is not just useful for re-hydrating your pet, serving picnic food or as a dust pan, as it has also become an international sport.

This game is played on a football field with 7 players from each team on each side, the disk is thrown from from one team to the next, this team then has to successfully catch the disk and make it to the other side and score in the zone, many factors can come into place to inhibit this and this is what the game is all about. A very “special thing about this sport” or “The most amazing” thing about this sport is that it is played without a referee and so players have to distinguish whats a fas and whats a pass.

After each game a spirit circle is held whereby they link arms and smelly armpits and discuss the game…awards are then later given for the teams with the winning spirit and those who are able to pass, catch and not drop the disk the best, leading them to accumulate the highest points.

For those of you who do know the game…here are the results from this weeks Špačince tournament.

This weekends frisbee tournament played in Špačince consisted of a 10 team play off, a few changes were made to some team formations and players lists. Outsiterz arrived with one team sure to be strong as it was a combination of the usual 2 teams , Scorpions have had a few changes and an influx of new, young and talented players were seen playing the field .

The cold weather of 14 degrees and below, winds and possible chances of rain made it harder to play and limited the game, long passes were kept to a minimal, we expected many teams to play zone, rather than man on man and passes to be kept short , low and strong with breaks as the final option to passing .

The tournament headed off in two groups.

Discredit ( BA ) played Kus plastic ( Senica ) , they were evenly matched and finished in a tye position of 5/5 by the end of the 45min time period, a long point was then played to obtain the final score, Discredit came out tops leading 6/5. Morthens ( Trnava )was up against U.F.O

( BA )loosing 5/8. Outsiterz ( BA ) took on Kus Plastu leading 8/0. Discredit was then placed against U.F.O who came out tops with 5/10. Outsiterz once again won, this time against Morthens with a close 10/8. U.F.O trumped Kus Plastu in a very close and enduring game with 7/6. Outsiterz went on to beat Discredit 9/4. Mortherns triumphed over Kus Plastu 9/2. And in he final playoffs of division A Outsiterz  took the lead beating U.F.O 13/4 and Mortherns combating discredit 12/3.

Day Two didn’t leave the weather conditions much better but the teams had a better idea of what to expect from it.

In the playoffs KEFear rivaled Kus Plastic beating them at a close shave of 9/8. Discredit stung the scorpions winning 9/6. Mental trumped Mortherns 9/6. U.F.O took Banik Lasky down 10/7. KEFear lost to Morthens 1/9. Discredit lost the game to Banik Lasky 4/13. Outsiterz were defeated by Mental 8/10. Golden Ants beat U.F.O. Playing for top 0-9 positions Kus Plastic defeated Scorpions , clearing them of last place. For position 0-7 played KEFear and Discredit, Discredit winning 9/7. 0-5 positions was Mortherns and Banik Lasky,  and into the Semi Finals for 3rd and 4th  position was Outsiterz 10 and U.F.O 5. But the game of the tournament was the Final, where Mental took on Golden Ants, both teams being incredibly strong throughout the tournament and Golden ants going un beaten meant they were both up for the challenge of being undefeated. This however is not possible as some one must come out tops. The game was tight, neck on neck through till the end. The final score was Golden ants 8 and Mental 9 leaving Mental as tournament champions, and Golden ants in 2nd place.