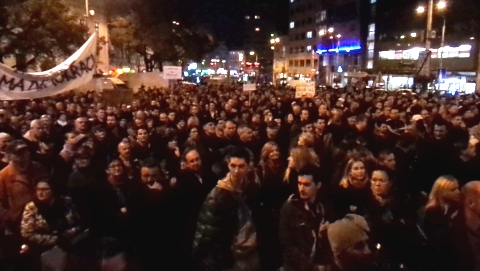 The opposition MPs who organised the protest meeting against now ousted parliamentary speaker Pavol Paska are not content with his resignation and plan another protest, this time demanding discussions with Prime Minister Robert Fico, who refused their request.

The MPs, Daniel Lipsic, Igor Matovic, Richard Sulik and Alojz Hlina, are calling on people to converge on SNP Square in Bratislava on Tuesday 25 November, after the Prime Minister refused to entertain them. PM Fico said he was not getting involved in political games with politicians who have minimum public support.

The MPs want to discuss the level of corruption in the Slovak health service and in general, and to outline plans to eradicate it, with them putting forward a six-point proposal. They are demanding more systemic changes and not just the recall of those who are caught, for instance, as well as material liability for those in public office. Without willingness from PM Robert Fico’s standalone Smer-SD government, however, nothing can move forward.

The protest will start on SNP square before heading up to parliament, which will be in session at the time. One of the proposals being put forward is for legislation to be pushed through banning certain types of companies, like those with anonymous owners, from taking part in public procurement.