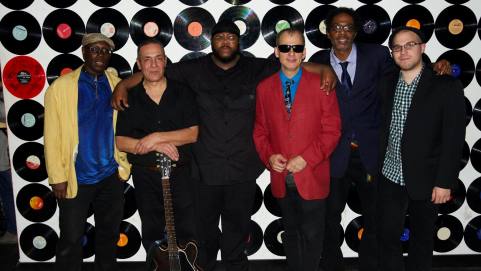 The New York Ska-Jazz Ensemble (NYSJE) is an internationally renowned recording and touring group. They are the originators of the style Ska-Jazz. Since the bands inception in 1994, NYSJE has released 12 CDs and have performed regularly throughout Europe, Canada, USA,Japan, The Caribbean and South America.

NYSJEs recordings and performances have garnered them critical acclaim for their high energy, creative originals, kinetic ska interpretations of jazz standards, as well as their potent mix of dance hall, reggae, rock steady and jazz.

After four years, NYSJE are coming back to Bratislava.

The concert will take place in Randal club on Tuesday, July 7, together with GONSOFUS (RU/HU).

We had a chance to chat with bandleader Fred Reiter (Rocksteady Freddie) (saxophone, flute, vocals)

Q: It’s been 4 years since the Slovak audience has had a chance to see NYSJE live. Happy to be coming back? Why the long pause!?

Fred: NYSJE is Very happy to be coming back to Slovakia. It’s been a while so we’re very psyched. No real reason for the pause except the vagaries of the music biz + some booking agent switches.

Q: What are the main changes that have hapenned in NYSJE since then?  What’s new?

Fred: Wow since then we’ve recorded a new record Double Edge + our new EP Free As A Bird. Many highlights in the past few years but my favorite is that my song Archnid off of our LP Low Blow was used in an HBO Documentary “Redemption” which was nominated for an Academy Award in 2013. Also on this coming show we will be presenting 3 horns in the lineup for the 1st time in NYSJE history. The sound is HUGE-the energy is high!!

Q: What can people expect from this concert that they haven’t seen before at a NYSJE show?

The 3 horns is it + 4 vocalists for the 1st time. Lots more singing in the set these days because KB (Kevin Batchelor –trumpet/vocals) is such a good singer and he inspires me + Alberto Tarin (guitar + vocals)

Can we expect a new full album from NYSJE soon?

We just recorded a Live record in Gouvy, Belgium last week, which we’re super excited about. Thank you for the questions, and we look forward to coming to Bratislava and performing together with GONSOFUS!

Sasha Mamaev: I’ve been listening to the New York Ska Jazz Ensemble for more than ten years, and had the pleasure of meeting Fred at our (GONSOFUS) concert in New York City in May (US Tour). I’m happy I could help to organize this concert, and very excited to have the opportunity to share the stage them.