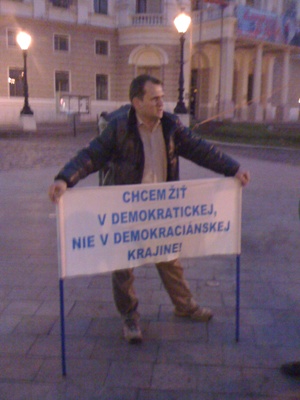 This Saturday the Czechs and the Slovaks are celebrating the twenty-third anniversary of …what? Or is it seventy-third? If you ask this question to the average twenty something youngster, the answers will be uncertain. It is understandable that these young people did not see the happening with their own eyes and some of them were not yet born.

During the 1980´s the inhabitants of the Eastern Bloc were becoming increasingly disatisfed with the political and economic situation. The protests varied. Everything started in the docks of Danzig in Poland. The Solidarity movement and its charismatic leader, Lech Walesa, steadily grew into a powerful opposition power. This gave a great power to back other opposition movements all across the Eastern Bloc.

Now, let´s go back in time for a minute. Why 17 November? What is it anyway? That day in 1939 during the Nazi occupation of Czech lands all universities were closed, over 1200 students sent to the concentration camps and the leaders of students movement executed. This goes even a little back in time when medical student Jan Opletal was fatally shot on 28 October by the Nazis on the street during the students protest commemorating Czechoslovak Independence Day.

The students protested again on 15 November during his funeral.

Since then, 17 November is international students day.

Now back to the future. I mean the past. You know what I mean.

The students gathered to walk to the grave of Karel Hynek Mácha (the national poet)  at Vyšehrad cemetery and after this “official” protest (acknowledged by the minders) about 15 000 protesters continued to downtown Prague to shout loud what they really thought about the regime.  It is important to say why students and why 17 November. It had been 50 years since the Nazis closed the universities. This was the real reason to protest.

Anyhow, somewhere around Národní Třída (Národní Avenue at junction with Spálená street – there is a monument today), the state police brutally stopped the protests. This was not a new thing to the students. Similar actions had taken place on Wenceslas Square a year before.

This time, however, a limp body of someone was lying on the street. It was Ludvík Žifčák, a secret police agent who acted dead, this being revealed much later with nobody knowing why he did that.

This resulted into a media hoax about a “dead student” who had been murdered by police. The public was horrified. “They are killing our children!” many cried that evening watching the TV news. The public got upset and very annoyed. That same evening, students and theatre actors agreed to go on strike.

In the days that followed, many went out in the cold and protested, an many went on strike. Civic Forum, the opposition force in Czechoslovakia, organized happenings and strikes in support of the protesters.

This situation finally ended on 29 December when the communist members of Parliament elected Vaclav Havel as the new president of Czechoslovakia. The 40-year long period of socialism was over and a new, now “federal”, sovereignty was born. This time not from the Habsburgs, and not the Nazi terror. This time it was by the Czech and Slovaks for themselves.

The wave of new democracies had swept across the whole of Eastern Europe. Some were as velvet as was the Czechoslovak revolution. Some were violent, like as in Romania where the hated Ceaucescu with his wife met the creator himself on Christmas Eve.

You don’t have to be a historian. The writer of this article may have a birth certificate issued in “Czechoslovak Socialist Republic” (I was born in April 1989, what a coincidence), but everybody should study at least some facts and ask the older generation time to time for their opinion.

God knows, if someone much younger would come to me one day and ask me  “What were you doing on 9/11 2001?” I will be more than happy to talk with him or her.

Part 1 of this article :  http://www.thedaily.cz/czech-autumn-holiday-season-approaching/