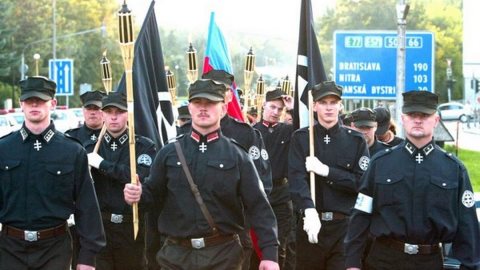 While Slovakian Prime Minister Robert Fico’s rhetoric on the so-called ímmigration threat’ that Slovakia faces has cooled somewhat, it may just be simmering on a low heat until populism or some incident turns the heat back up.

That fearmongering rhetoric caused Fico’s SMER party to lose a chunk of the electorate to the extreme right party of Marian Kotleba in last year’s elections (around 18.5% according to Focus agency). Kotleba’s LSNS party (People’s Party Our Slovakia) gained over 8% of the vote, meaning 14 legislators with a bent for hatred of others now sit proudly in the 150-strong Slovak parliament (or more than double that if we include the Slovak Nationalist Party – SNS, now part of the government coalition).

Soon after the elections, we had to witness quasi-military patrols on trains by Kotleba’s not-s0-merry band of followers, the real objective of which was never quite clear. They certainly struck fear into anyone of Roma or other ethnic minority, or anxious foreigners for that matter.

Even though the government was eventually forced to set out legislation in force from 1 January 2017 prohibiting these patrols, the sentiment remains and could be spreading like a vile virus.

I was reminded of this once again while enjoying the New Year celebrations at Bratislava’s favourite tourist trap, the Dubliner Irish Bar, when the singer suddenly, and without cause, shouted over the microphone in Slovak: “F*** foreigners, this is our republic”!

I was exposed to this kind of hostility after publishing an article last year on an anti-fascist protest, after some unknown ‘lady’ (ironically on a Facebook group for foreigners) told me to go back and “post smart fucking articles about”” my own country etc etc. Tough call for me after 27 years living in Slovakia.

Given recent developments in the USA and other European countries and the rising number of terrorist attacks in Europe, this sentiment looks set to heat up and possibly reach boiling point at some time in the not so distant future and as yet nobody has come up with any kind of solution as an extinguisher.

Slovakia is among those countries with the lowest percentage of foreign residents of all EU countries according to the International Organization for Migration (IOM), with all migrants accounting for just 1.56% of residents in the country. On the other hand, outward migration from Slovakia stood at 5.92% in 2015, with 341,620 Slovaks living outside their country of origin.

People have apparently always needed a scapegoat to blame for their own failings and as the political and social failings of those they elect mount, the finger-pointing escalates.

I, like most people, have no issue with preserving national identity, traditions and culture. On the contrary, it is through diversity that we can appreciate each other more, while division and discrimination can only produce hostility, hatred and conflict. Maybe if people with open minds and hearts were to unite more, we could extinguish this aggressive fire, slowly but surely. Free your mind!