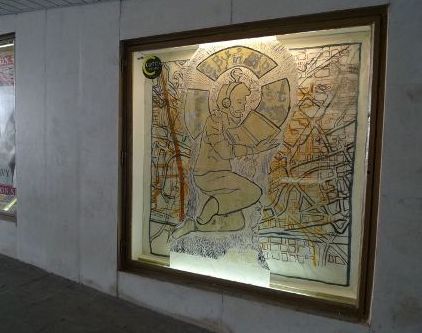 How many of us have noticed a window with constantly changing content in Zochova Passage? No, we are not talking about advertisements here. Clutch Gallery is a single window-turned-art space that was founded by Christiana Caro and shows works by Slovak and American artists.

The exhibition named Ruty Šuty is on show just now  for attentive passers, and the work of young American artist Charles Coates  will be up till 11 April. Ruty Šuty‘s map is sourced from the two Google Maps of the cities Tucson, Arizona (artist’s hometown), and Bratislava, Slovakia. 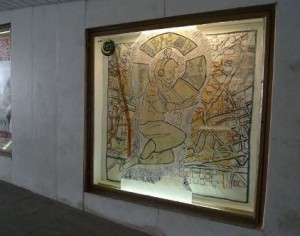 ‘Maps reveal intention, age, and geography. Google Maps, however, eliminates these first two characteristics. The intention of a Google map shifts from user to user. Additionally, Google maps stay in the present, eliminating age and time. The intention behind this map is to combine two distant geographies into one location. The visual layout of Ruty Šuty‘s map is sourced from the two Google maps of Tucson, Arizona, and Bratislava, Slovakia. The former is plotted in a gridded motif, while the latter is a medieval vortex, spiraling outward. Together they create an abstracted landscape, unreadable. In the center is a human sized milagro, or Ex-Voto. In Arizona, the milagro is a tangible prayer, made in the objective likeness of that particular wish. This milagro of a life size human floating in a current, is a hope of constant connection between two places, regardless of time and distance. Ultimately, Ruty Šuty, is a piece about being in two places at once, the disjointed communication between two friends and loved ones, and the internet’s promise for a constant connection through social networking that is not fully fulfilled.’ 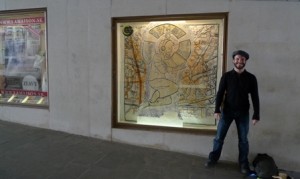 Charles Woodruff Coates came to study print making at VŠVU (Academy of Fine Arts and Design). Using a traditional sketchbook for his drafts is not the only way to express, but it permits a more  “organic” , lifelike, livelier drawing. Working on an iPad not only lets him reproduce an image in the digital world and share it easily, but also allows drawing unobtrusively in more sensitive environments.

Besides, most of his attention, especially at university, is taken up by drawing on woodcut, carving forms and inking. Then printing on a Japanese Sekishu paper. We can also see the result of this laborious process in the Clutch Gallery.

So if you happen to be heading from the Old Town to Zochova bus stop, slow down a bit in the passage and check out some art in one of the 170 cm squared windows.