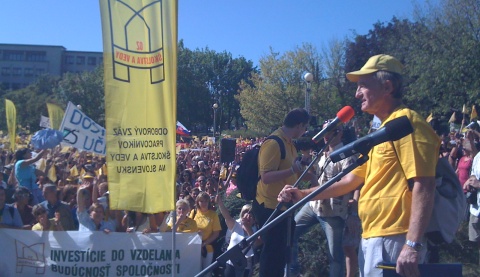 After failing to agree with the government and the Ministry of Finance, teachers throughout Slovakia look set to go on strike from Monday 26 November, with the length of strike to be determined by individual schools.

The government offer of a 5% hike in wages was rejected by the trade union, which is demanding at least 10%, and so schools all over the country will go on strike from Monday indefinitely depending on the ability of the teachers to bear the financial burden of being on strike. In addition to loss of wages, they have to register as self-payers with the health insurer and pay health insurance for each day on strike.

There is still some scope for an agreement between the trade unions and the government in the following days, but so far neither side is budging. Teachers are also planning possible protests on Monday morning in Bratislava, Kosice and Banska Bystrica. Just like the previous strike in September, nobody knows how many teachers and schools will take part in the strike.