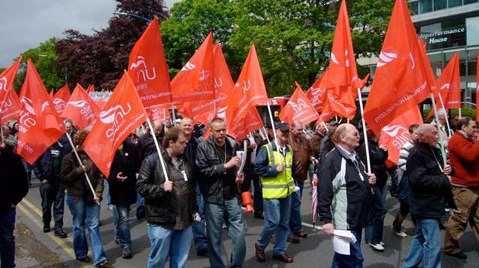 The series of public protests by trade unions in response to the government’s austerity measures continued on Friday in Zilina, with over one thousand people taking to the streets. Tomorrow, 12 October, trade unionists from around the country will converge on Bratislava, meeting on the square Namestie SNP in the afternoon, from where they will march up to parliament.

The public demonstrations were brought on as the trade unions disagree with the government’s plans aimed at reducing the public finance deficit, which the trade unions claim affect employees and socially disadvantaged groups in particular.

The unions want the government to target wealthier groups more through varied VAT tariffs, the taxation of dividends, abolition of the the 6% tax on yard sales of home produce and by preventing any hike in excise tax on basic fuels like coal and gas. They are also against the planned revision of the pension valorisation system.

The trade unions hope their protests will be sufficient to get the government to reconsider certain issues, which were agreed on without them in the end as tripartite talks broke down. If this does not happen, they would even go as far as to call for strikes.