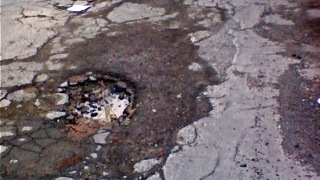 With the introduction of the electronic toll payments this year, many truckers have started using back roads so that they don’t have to pay.

Regional authorities are concerned about the burden this is putting on the roads, causing damages, and so they have now turned to the Ministry of Transport requesting that a law be drawn up prohibiting lorries from using class B and C roads.

“Our roads were built for light traffic, and one lorry can cause more damage than maybe ten thousand cars. We have to ensure that lorries don’t go where they shouldn’t” said head of Banska Bystrica region, Vladimir Manka at the SK8 meeting of regional authorities on Monday.

Head of Trnava region, Tibor Mikus, reckons that about a quarter of all secondary roads are being abused in this way. As regional authorities are already hard-stretched for cash, they do not have the funds to repair the damage to roads, and so claim that the road network could face collapse if the problem isn’t remedied.