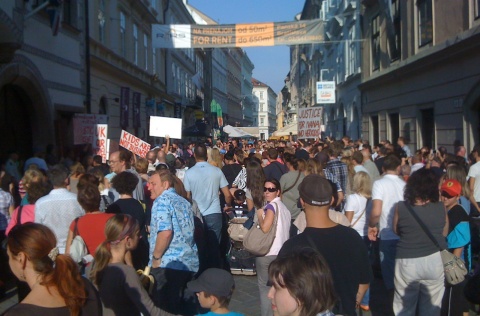 The court in Chatham ruled today to return five Slovak children of the Conkov family to Slovakia instead of to adoption in the UK, after all five were taken by Social Services in the UK, with the youngest being just three weeks old.

Naturally, the family from Humenne in East Slovakia is overwhelmed by the ruling, which also gives a ray of hope to others who have found themselves in the same position as the ruling might set a precedence. Although the family can return home with their children, once in Slovakia the Slovak social services will intervene and could place the children in a home depending on its assessment. The hearing was attended also by the Slovak consulate in the UK and head of the Centre for International Legal Protection of Children.

The Conkov case recently came to the attention of the Slovak media, in addition to the B family case. According to the Humenne Korzar, a total of 68 Slovak and Czech Roma children alone have been taken from their parents in the UK, based on the information of the European Network Against Racism (ENAR).

Representatives of ENAR from various countries have now started monitoring how many families are having their children taken by Social Services in the UK. The findings show that most of the accusations were even related to sexual abuse or tyranny, with excuses like when an 8-yr old boy was caught with a cigarette in his mouth.

The Conkov family lost all their children after the younger ones were being attended only by the 15 and 17 year old siblings, because their Polish nanny had allegedly left them unattended while the parents were on night shift. according to ENAR, many of these Roma families did not turn to anyone for help and did not battle with the British authorities, partly because of the language barrier and partly because of the financial demands involved.

ENAR therefore plans to write to the social services authority in Great Britain in protest and local representative for Slovakia is seeking an audience with British Ambassador Susannah Montgomery, also with the offer of an official interpreter for the Roma language. Anyone having problems with the police, social services and so on, can write for advice to ramad@centrum.sk.