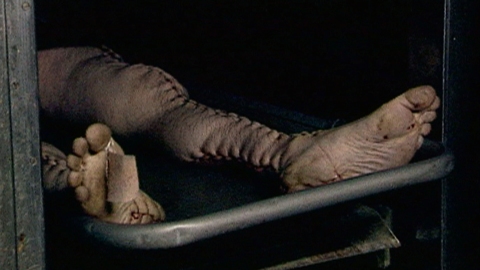 Everyone a potential donor

Few people realise that the bodies of our deceased loved ones are often being harvested to generate commercial profits by being transformed into costly medical devices. Worldwide millions of body parts are being taken, processed and eventually sold as medical or cosmetic products every year in the fast flourishing business of tissue trade. The business of skin and bones.

The Daily.SK as the regional partner of the International Consortium of Investigative Journalists (ICIJ) in its ongoing 10-month expose of human tissue trading, looks deeper into the situation in the Slovak Republic, where hundreds of bodies have been stripped of bones, veins, muscles, cornea, tendons, etc. by a private company, which then shipped them off to Germany for processing, from where they are sent all over the world.

Most people in Slovakia clearly don’t know their loved ones are being recycled in this way, because the country endorses an Opt-out system, so unless you refuse while alive, the so-called tissue recovery teams are fully entitled to ‘harvest’ what they can from your lifeless body. The problem lies not in the medical use of certain body parts in surgery or for transplants, but in the commercial exploitation of the dead.

Mourning relatives are generally unaware of the practice, and sadly, some discover it only after the butchered remains of their loved one’s body are released to them, as in the two cases from Ukraine and USA included in the ICIJ reports. The often blatant disregard for the dead discovered in some cases shows the darker side of this international business, where corpses are often ‘processed’ as quickly as possible, as more bodies essentially means more money in a sordid industry where demand far outstrips supply.

Thanks to the opt-out system, Slovakia provides a fertile source of these so-called tissues. Although the arguments in favour of using dead body parts for medical purposes are pretty much accepted, ethical questions arise when the practice is linked to profit and cross-border exchanges. It should be fully controlled and regulated by the state, but unfortunately in the Slovak Republic, like elsewhere, this has not entirely been the case.

Former head of the Healthcare Surveillance Authority (UDZS) Jan Gajdos explained the system to us while still in office: “The Slovak Republic is one of the countries in which the law assumes implicit consent for the removal of organs, tissues and cells from the bodies of deceased donors. This means that every deceased person is a potential donor unless they have made a written declaration in their lifetime that they do not wish their bodily integrity to be interfered with.” In 2010 just 86 people opted out as donors in Slovakia, with a large part of the population not even aware of the option or that they are already on the donors list.

Tissue removal can only be done by an institution that has the respective license from the Ministry of Health SR. This special license, endorsed by former health minister Richard Rasi, was granted to just one private company – Tissue Research Institute s.r.o., while co-operation between it, the UDZS pathology workplaces, doctors, ambulances, the funeral service and hospitals ensures a swift and smooth operation.

Before standing down as head of UDZS over what he referred to as “politicisation” of the authority, Jan Gajdos had already stirred a can of worms by questioning and then cancelling the contract that his predecessor Richard Demovic had concluded with the company TRI. The company reacted by lodging an appeal and threatening that it might even claim for substantial losses. Gajdos admits that he was visited by certain influential people afterwards, and that he even received threats.

In addition to suspending the contract, Gajdos also filed a criminal complaint against the company and called for a change of legislation to get tissue exports under control, as current legislation was inadequate. He says Slovakia needs just 50 or so dead donors to cover its requirements, which the state-run tissue laboratories can easily handle. He therefore questions why this special license was issued to the private company TRI at all. According to UDZS data, a total of over 13,000 tissue items were removed from 636 bodies over the three years since TRI started doing business.

Slovak law explicitly states that tissue removal (bones, ligaments, tendons, cornea, skin, heart valves etc.) can only be done for “the purposes of transplantation and scientific research” and not “with the aim of financial profit or other material gain”. Even so, holes in the system have allowed literally thousands of lucrative ‘spare parts’ to be exported from Slovakia every year. The tissues from one body can yield an income from recovery to distribution of up to USD 200,000 according to the documentary Cannibalised, which uncovered the same business in Ukraine, involving the same German partner of TRI, Tutogen Medical.

The contract that the company TRI concluded with the UDZS on 10 March 2009 gave it right of first refusal to tissues from freshly dead donors, and so the young company, set up just a few months earlier on 19 December 2008, has been a steady provider to German concern Tutogen Medical ever since.

For Gajdos, one of the most disturbing findings was how TRI was using a different system for preserving tissues (in a saline solution) than that applied in Slovakia (by freezing), so none of the tissues that TRI was obliged to harvest ‘preferentially’ for Slovak patients could even be used here.

Another advantageous clause in the agreement was that TRI could conclude work agreements with pathology workplace employees. TRI did not have its own removal team but used employees of the UDZS instead. This contract essentially meant the company had a ready-made workforce in place at fully equipped facilities, and first choice to new corpses as they arrived.

Thanks to the agreement signed by former UDZS head Demovic, UDZS employees would harvest bodies for TRI during normal working hours. Gajdos estimates that it takes about 3 hours to do a full ‘recovery’, and that up to 15 kg of tissue can be extracted from a body.

As the doctors working on the tissue removal reportedly receive up to EUR 400 per body, this provides a massive financial incentive, especially if they can process three bodies a day. This side job became such a problem at the pathology workplace in Nitra that reports came in of how specialists in Nitra were working almost solely on removing tissues for the private company TRI.

A Ministry of Health inspection last year showed that none of the tissue removed by TRI had been used in Slovakia. All had been exported abroad to Germany, to the company Tutogen Medical. Based on these findings, on 6 February 2012 Gajdos halted tissue removals for TRI at its pathology workplaces and sacked responsible department heads.

An internal audit of TRI tissue removals followed, finding “violations of the contractual terms and conditions relating to the distribution of tissue since no tissue had been used in Slovakia”. The UDZS then terminated its agreement with TRI with effect from 16 April 2012 and filed a criminal complaint to the District Prosecutor of Bratislava II, with charges of unauthorised removal of organs, tissue and cells from the dead. The investigation was eventually passed to the police of Bratislava IV, where an investigator has only recently been allocated to the case.

“Tissue removed by TRI could not in fact be used in Slovakia because it had not been treated. TRI does not carry out treatment and during its contractual relationship with the UDZS it concluded no agreement with any tissue laboratory in Slovakia for such procedures”, Gajdos explains in justification of the criminal accusations.

The former head of the authority believes TRI may have exploited loopholes in the law that allowed the company to export an unrestricted volume of tissue to Germany. The only condition was that it firstly offer tissue to tissue laboratories in Slovakia on a special central register for at least 72 hours, but laboratories could clearly not accept TRI’s untreated tissues. Now it is up to the police investigator to determine whether this activity was being done for financial or other material gain or not, a strange subject matter to investigate on a private company.

With legal loopholes and inadequate controls and tracking, to date there has been almost no limit to the quantities of tissue that can be taken from cadavers (dead donors), with pharmaceutical and other companies screaming out for the valuable material.

Legislation in place to date in Slovakia made no concessions for regulating or limiting the exporting of tissue, but under pressure of recent revelations the government pushed its own revision of the Healthcare Act to a second reading just last week. The draft bill (Act 576/2004), includes a Regulation on tissue and cell exports, but it basically consists of a standard form for requesting tissue exports. Gajdos feels that the revision is inadequate and that process procedures set out in the law need to be totally revised, together with stricter supervision.

According to the new bill, the applicant (or exporter) has to announce the destination country and also declare that there is no need for the tissue in the Slovak Republic. With more than 5 million potential donors here, there is no reason why Slovakia should ever suffer a shortage. The new regulation could end up legitimising the business of cross-border tissue transfers instead of constraining it.

The process will most likely be overseen by the National Transplant Organisation, which the government plans to set up as part of the said legislative revision. Its consent would be needed for tissue exports, but exactly how the system would work remains to be seen, especially as the NTO itself will also be conducting commercial activities.

So who exactly is behind the company Tissue Research Institute and why was its progress so smooth? What kinds of products are made from our dead parts and why is it such big business? We will be answering these and other questions and getting some responses from TRI and Tutogen Medical tomorrow, in the second article in this series on the Slovak tissue trade.

The editors in chief of TheDaily.SK and LaVoce.SK have also been co-operating with national broadcaster STV, which will broadcast a special report on the tissue trade this evening at 9.50 pm on the programme Reporteri on STV1.

With the co-operation of Antonio Papaleo (AEJ Secretary for Czech Republic, editor in chief of LaVoce) and all the people at the International Consortium of Investigative Journalists (ICIJ)

* The International Consortium of Investigative Journalists is an independent global network of reporters who collaborate on cross-borders investigative stories. To see video, graphics and more stories in this series, go to www.icij.com/tissue. This story was co-reported by National Public Radio (USA)

All materials herein are copyright of TheDaily-LaVoce/ICIJ and may not be reproduced or redistributed without prior consent. To enquire about republication or localisation, please contact tonypapaleo@lavoce.sk.

Part 2. Big bucks in body brokering from Ukraine to USA

Part 3. Stewards of the “Gift”