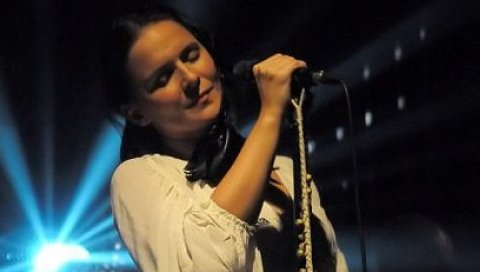 Emiliana Torrini will be the first artist confirmed at the next Pohoda Festival 2012. The Icelandic singer, already in 2009 in one of her last interviews stressed quite specifically that he wanted to return to Trenčin to perform again.

“Emiliana Torrini has produced beautiful recordings and her concerts are a feast of music with unique and fragile pieces are so much more exuberant and energetic live,” said festival director Michal Kaščák. “We also know Emiliana off stage and it is a privilege for me to host a wonderful person like her,” reiterated Kaščák.

Emiliana Torrini born of an Italian father studied opera singing, and music has accompanied her since childhood. She recorded three albums in Iceland from 1994 to 1996: the first “Love In The Age Of Science”, and the other two “Fisherman’s Woman” and “Me and Armini”, which definitively consecrated the singer beyond the borders of her country, highlight her beautiful voice. At the moment Emiliana is preparing another album that we hope to present in Slovakia, namely at the Pohoda Festival.

The festival at the former airport area in Trenčin with a capacity of 30,000 units last year was a total sell-out. Tickets for all three days cost EUR 85 for purchase online at the official website www.shop.pohodafestival.sk, at pre-sales points of Ticketportal, and at all the other dealers listed on the site. Presale tickets are also available for the parking of cars and campers.

More information about the festival can be viewed here.