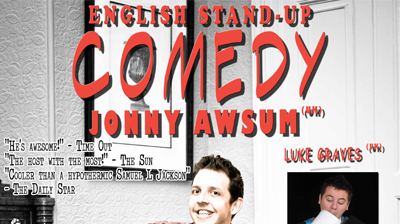 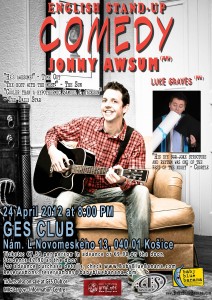 NEW! Reduced prices for advance purchase and for students.
Tickets: €7.50 in advance / €9.90 on the door / €7.90 students.
To get your tickets in advance, just click: http://tinyurl.com/czbxqvo
Tickets can also be bought in person from GES Club or from MIC Dargov – Information Centre.
To reserve seats, email Reservations@BabyBlueBanana.com

Musical comedian Jonny Awsum brings a new dimension to the Baby Blue Banana comedy stage, combining stand-up comedy, hilarious songs and skillful banter to guarantee an evening of fun and laughter. Opening the show will be Luke Graves, a rising star of British comedy, who has been tipped for stardom by many of the biggest names in comedy.

From his roots in a small Derbyshire village, Jonny Awsum stumbled into the bright lights of comedy and fortunately discovered that people are laughing! Jonny offers his own unique style of comedy, with a clever blend of stand-up and music. With his likeable style and trusty guitar, Jonny’s musings include everything from the white lies he tells his girlfriend to the stadium banter of Jon Bon Jovi and the memory of his first love at eight years old.

Jonny exploded on to the comedy scene in the UK, winning some of the most prestigious awards within his first two years, including the Magners Comedy Award and the Comedy Café Best New Act. He went on to complete a sell-out run at the Edinburgh Festival Fringe and has since progressed to being one of the most sought after performers on the UK’s live circuit. Jonny’s feel-good set has captivated audiences of all types and sizes from small pubs to stadiums of 70,000 people, pleasantly surprising many who might not have expected musical comedy to be their personal taste. Jonny has also become a very familiar face on TV across Europe, starring in a number of high-profile commercials.

What the critics say about Jonny Awsum:
“He’s awesome!” – Time Out
“Cooler than a hypothermic Samuel L Jackson” – The Daily Star
“Delirious and hilarious” – Notion Magazine
“Jonny is, in fact, Awsum!” – Polydor/Universal Music

Luke Graves is a relative newcomer to the UK comedy circuit but has already won numerous awards and caught the eye of some of comedy’s biggest names. He has performed at most of the top comedy venues in the UK with great success. Full of charm and confidence Luke brings a relaxed and friendly and slioghtly cheeky style to the stage, which instantly puts the audience at its ease. He manages to improvise and interract well without ever making anyone feel uncomfortable. His material is original and intelligent, with a style ideally suited to any international audience. Luke is a very funny, charming and naturally engaging comic.

What the critics say about Luke Graves:
“A brilliant young comic bursting with promise” – Arthur Smith
“His eye for joke structure and rhythm was one of the best of the night” – Chortle
“Nice easy delivery, good jokes, fresh, youthful persona. This man must be stopped” – Ronnie Golden

Following the success of the February and March shows, we expect this show to be extremely popular, so we strongly recommend making reservations early to avoid disappointment. Tickets are now reduced at just €7.50 per person in advance or €9.90 on the door, with students’ tickets at €7.90 at the door. Tickets can be purchased online in advance or with with cash from the venue, GES Club, or the MIC Dargov Information Centre. Just click: http://tinyurl.com/czbxqvo to get your tickets online now.

If you prefer to pay in cash at the door on the night, you can still reserve your seats by emailing: reservations@babybluebanana.com to let us know how many tickets you need.