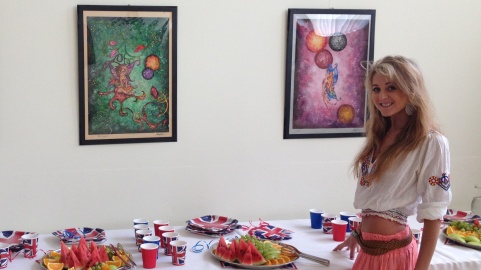 Though the weather was somewhat grey in London for the Silver Jubilee of The Queen, the mood was far from damp here in Slovakia! British nationals and friends marked the occasion with three legged races, egg and spoon competitions, union jack cupcakes and of course copious piles of the good old cucumber sandwich!

So as the jubilee fever dies down, it was lovely to see the British Embassy here in Slovakia host a fantastic afternoon of general ‘Englishness’, to mark the occasion! Though the blazing sunshine was not typical London weather, the games, the food and even the artwork on display was all 100% born and bred British! The British ambassador, Susannah Montgomery, a lovely woman decked out in a patriotic Union Jack scarf, opened the event with a small speech and is keen to introduce more and more activities and events for the expats and British community here, and this party was a great start to the new initiative.

The paintings on display were done by myself, Abbie Puskailer, as I create unique fantasy pieces combining paint and crayon in collage, a technique and style i have created entirely myself. My Slovak husband Thomas Puskailer, a well known singer here in Slovakia also sang to the guests adding some live music and entertainment! This was also the first time a British artist has exhibited in the Ambassador’s residence, and the paintings are now on display and also selling at the new Star Cafe on Hlboka 1. A larger exhibiton featuring the entire collection is planned in collaboration with The British Embassy in August.

Many who attended commented on how pleased they were that the Embassy seemed to be playing a more active role recently, largely due to the relatively new Abassador and also the Jubilee and upcoming Olympics.

As a typical Brit, I love to moan about the monarchy, but actually harbor a secret love affair with the scandal, gossip, fashion and general mystery that surrounds their lives and personalities. I mean, what do they actually do? In my mind i imagine days consist of practicing those essential royal skills, eg, waving, cutting supermarket ribbons and how, most practically and regally to smash a bottle against the side of a boat!
Not to mention keeping one’s huge bird or feather creation of a hat on one’s head through gale force winds, and avoid laughing at the usually inappropriate and politically incorrect jokes of Prince Phillip!

Living abroad on such a huge and momentous weekend did stir my patriotic side I must admit. As I sung along, (alone and badly), to God Save The Queen…(my husband did not know the words!), a small tear may have formed in my eye! A slightly tragic portrait I must admit, as I skyped with friends on the banks of the River Thames, ON the River Thames, in London pubs and at street and house parties across the UK. Sometimes, I really think you can’t beat a good old British bash!

As an ‘Englishman’, (or woman rather), through and through, watching the jubilee from abroad actually stirred many emotions! Admittedly my reaction was shock, as I shouted loudly at my TV….’get those two O.A.Ps off that bloody boat!!!’ Surely there’s some kind of prevention organisation against this!

I mean really, who puts a 92 year old man on a boat for 4 hours, in the rain, wind and cold and expect him to stay standing! ‘For the love of God….sit down!’, I still shouted after four hours of witnessing their old wrinkled faces clenched against the freezing wind. Even the BBC reporter commented that perhaps The Queen and Prince Phillip should perhaps retire below deck!

But no, in true English style, they kept their ‘stiff upper lips’, in place and rode the waves of the Thames with grace and dignity. Though the ‘stiffness’, of lips was greatly helped by the freezing temperatures no doubt!
‘Nothing like a minus 5 degree wind to stiffen up that lip hey old chap!’, I am sure one royal probably muttered at some point!

What seemed like the longest river voyage in history, the Royal boat eventually swerved precariously into port. As the boat appeared to be heading straight into the side of the pier at speed, The slightly morbid and darker side of me may have had visions of the entire royal monarchy of England capsizing and having to be pulled from the smelly Thames river, clutching their crowns and jewels and expensive handbags as they crawled up the river bank. Thankfully this was not the case, though I hate to admit a part of me would have perhaps relished in this sight!

However, despite all going to plan, The Prince taking ill did make me sad as his frailty was clear from the outset.

Despite this small misfortune, from what I understand, The Jubilee was considered a huge success for England! As usual, ask a Slovakian’s opinion and it’s gauranteed to be somewhat different!

Upon asking my Slovak Father in Law his view on the amazing event, his response was,  ‘the English are just happy because they were lucky this time nothing was blown up and no one died’! I guess the bad people are saving up all the bombs for The Olympics!’.
I assured him I was sure this was not the case, and the Olympics will be another amazing time for England, though I was met with a sad stare and the slight solemn shake of the head, a head shake I have come to know so well here in this country!

Anyway, despite this slightly negative slovak point of view, The British Embassy managed to capture the true spirit of Jubilee for an afternoon and am looking forward to seeing what they organize in the future. As I learn more and more about Slovak culture and their view on life, i see patriotism is also strong, especially amongst the older generation.
But as I hum the tune of ‘Jerusalem’, under my breath and unwrap my dad’s package containing English tea bags, a Daily Mail, some British books and a picture of all my family having Sunday lunch in an English pub, I do say to myself, ‘You know what?…God Save The Queen’!

Watching the events of 2012 make me feel proud and lucky to know that though England is not where I currently live, it’s where I come from, and part of me will always be colored Red, White and Blue.