On the TV programme “V politike” on the TA3 news channel, President Ivan Gasparovic replied to the accusation that he had pushed PM Iveta Radicova out of the way after Slovakia’s ice hockey team lost 4-3 to Russia. 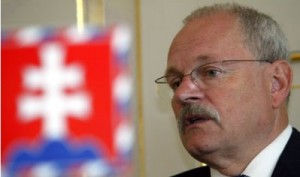 The incident was made public by the PM’s advisor Marian Balazs, who said he was totally shocked at what he had seen. Balazs explained how while waiting for the lift after the match the President had elbowed PM Radicova while telling her not to get in the way.

Gasparovic never apologised for the incident, which he says was just a big joke. After the incident he told the media that it was the PM’s advisor Balazs who should apologise for creating the scandal. Gasparovic still did not apologise on the TV programme, even though formal protocol or mere social etiquette would call for it, regardless of whether it was meant as a joke or not.

Gasparovic explained that he would never shove or hit any woman, never mind the PM. He said was sorry that Radicova didn’t get his joke, and that he was disappointed in her that she let her advisor take things too far.