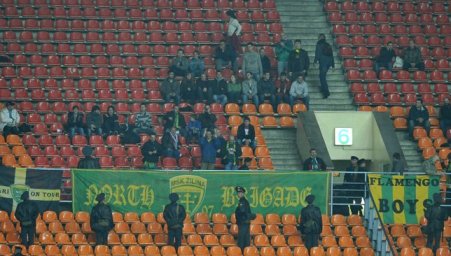 Any European football fan could well question the wisdom of spending an evening watching a struggling Olympique Marseille team take on Slovakian Champions MSK Zilina in what was largely assumed to be a forgone conclusion, at best a playoff for 3rd place in Champions League Group F.  Especially with matches such as Real Madrid v AC Milan and such other favourites as Bayern Munich, Ajax and Arsenal all kicking off simulateneously.

But watch it we did, and it seemed by the Twitter response to my question if anyone else was watching, we were in the minority!  I did however ‘meet’ the Eurosport minute-by-minute reporter who was struggling away with a dodgy internet feed.

Mr Eurosport was right in his conclusion that ‘neither team impressed him much’ but MSK Zilina are not necessarily expected to ‘impress’ people at this level, at least not in terms of making the wider football world really take note of what they’re doing and the state of Slovak football.  They are here to gain the experience needed to continue their development and become more competitive in years to come.  Maybe they will give a couple of big names an uncomfortable ride in the process, but this is all to the benefit of themselves and the Slovak football public.

This match will probably be interpreted as another goalless mission too far for the unknown minnows and the questions over their inclusion in the competition will continue to grow.  I’ll counter that point later.  Zilina were facing the French Champions, in their home stadium (renowned world-wide for it’s vociferous atmosphere) in front of a public who expected nothing less than victory in a match  with very high stakes.  All that on the back of a 4-1 home defeat to Chelsea and a comprehensive 3-0 away defeat in Moscow.  What a test of character for a team playing their first season at this level.

Zilina have benefited from a good rest over the last couple of weeks back home and how that showed even before the kick-off.  Zilina looked relaxed, in good spirits and determined to give  a good showing this time out.  Empty seats were evident around the massive stadium and although the Zilina fans’ bus trip had been cancelled a healthy showing of green & yellow supporters were present in their cage in the corner of the Stade Velodrome.  Credit to them.  And how close they were to celebrating just 2 minutes into the game.  Momodou Ceesay beat his man to the byline then cut back inside towards the goal and was clearly tripped by a clumsy challenge.  I was watching with French commentary which is known for it’s lack of impartiality at the best of times, but even they were of the opinion that this was a clear penalty.  Play was waved on and Marseille fans will probably argue that the decision was levelled out after the home side also had a couple of shouts for penalties waved away later in the game, but this could and should have been a dream start for Zilina.

Expert analysis of the match can be found elsewhere but what struck me, and presumably the Zilina players too, was how awful Olympique Marseille were.  It was amazing how the French Champions who presumably see themselves capable of progressing to the knock-out stages of the Champions League, were so sloppy with possesion and so badly organised in defence, especially down the flanks.  Zilina were in the match from the start and they stayed in the match throughout.  The stats do tell the story, Marseille did dominate, but without ever looking in control.

I’ve often wondered why fans get so excited when their team wins a corner, and that feeling grew as Marseille had 12 corners in the first half, all but one of which comfortably dealt with by the Zilina defence.  I suppose after that it was inevitable that Marseille would score from their first corner of the 2nd half.  After the goal I thought it might be flood-gates time, and was preparing to credit MSK for their first half display however quite the opposite happened.  Zilina really started to play good football and exploit the awful ball-retention and gaping defensive holes left by their opponents.  I thought Hapal had the tactics spot-on from the start and his substitutions were also good and well-timed.   Majtan looked dangerous, great movement and although Ceesay didn’t exactly put himself top of Marseille’s wish-list, he did hold the ball  up well and win the flick-ons for Majtan to chase on to.  Oravec was brought on with enough time left and on another night he could also have sneaked a goal, a bit like for Slovakia against Ireland last week.

The best chance of the half and possibly the best action of the game came on 62 minutes when Robert Jez unleashed a fierce and well-placed shot from another cutting ball through Marseille’s defence and only a great save from keeper Steve Mandanda prevented the equaliser.

Right up to the dying moments of injury time Zilina could have equalised but Marseille held on for a thoroughly unconvincing victory. The ‘bare minimum’ in their own words.  Zilina gave an excellent account of themselves, and especially in the 2nd half looked an equally accomplished football team as their more illustrious hosts.  The contrast with Moscow was huge.  Stand-out performances from Stanislav Angelovič and Robert Jez and a good all-round show will leave Zilina with some hope of gaining something from the return match in Slovakia.  Marseille will not be looking forward to that trip.

I suppose the conclusion after this round of games is that the final positions in the group will remain as they are. On the subject of whether ‘minnows’ like Zilina should be in the competition, they have just given a solid account of themselves against a European giant.   Furthermore, several hundred Zilina fans travelled to support their team to a city not well connected with their own.  By contrast, my colleague went to Ajax v Auxerre, the team based some 6 1/2 hours drive from Amsterdam returned numerous tickets and turned up with just 200 or so supporters.  Defeated by a team who are also not exactly experiencing the best years of their history, Auxerre put on a very disappointing show.  MSK Zilina are domestic Champions, look like running away with the league again this year and came through a demanding qualifying competition to be here, what more can be asked of them?  Victory over Marseille at home would have added to Slovakia’s UEFA coefficient and perhaps go someway towards silencing the critics.