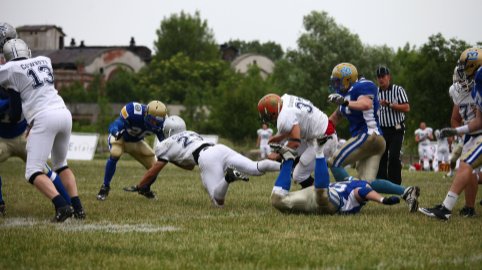 With the season on the line, the Monarchs stepped up and punched their ticket to the CEI Bowl with a convincing 34-7 win over the Budapest Cowboys on Saturday. The Monarchs came out swinging and scored touchdowns on their first 2 possessions to jump out to an early 14-0 lead. These touchdowns came courtesy of the defenses’ interceptions that ended the Cowboys’ first two drives. 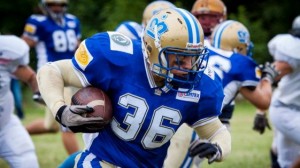 The Monarchs defense had 6 interceptions on the day and never lost the lead. Quarterback Anthony Karpat (89) bounced back from an unimpressive performance in Gyor two weeks prior and threw for two touchdowns, ran for another and only threw one interception. The two touchdown passes were to wide receiver Marek Balog (83). Josef Pito (27) and Stefan Slovak (36) contributed with rushing touchdowns of their own. 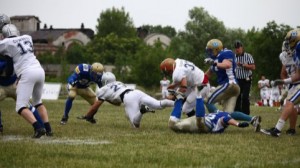 The Cowboys never really got anything going and the Monarchs made them pay for their mistakes all day long. In fact, half of the Cowboys’ total yards came on penalties enforced against the Monarchs. With the offense scoring 5 touchdowns and the defense forcing 7 turnovers, the only ugly thing about this win was the weather. However, the stadium was packed (by Slovak football standards) with the Monarchs faithful playing the role of the 12th man. The Monarchs now have about a month to get ready to play the Nyiregyhaza Tigers for the CEI championship. The Monarchs will look to avenge their loss against the Tigers. However, for reasons unknown to this writer, the Monarchs must travel all the way to Nyiregyhaza to play for the championship. No neutral ground for this game. The Tigers remain undefeated in the league and are the only team to defeat the Monarchs.